The AMAP III Conversion Kit allows you to directly attach Agilite AMAP III and other Agilite accessories to ANY plate carrier. Agilite plate carriers come already fitted with the K-Series attachment system that allows you to directly attach assault packs. However, if your Department or Military unit mandate a non-Agilite carrier, the conversion kit can be retrofitted in minutes and makes any plate carrier compatible with Agilite Assault packs or hydration systems. After installation, you can don/doff your Assault pack in seconds.
The Conversion kit is very low profile so it can be left on your plate carrier permanently or can be removed quickly when not in use, if you prefer.

Why would I want to attach my Assault pack directly to my Plate Carrier?

Directly attaching your assault pack to your plate carrier means that your entire gear and survival sustainment system is one grab away, whether from your gear cage, your vehicle or from under your bed. When you need to catch the HELO or when facing a bad guy, you have your Plate Carrier, armor, ammunition, helmet, eye-pro, supplies etc in one grabbable unit, reducing your response time.
It also means that in a gunfight you don’t have shoulder pads on shoulder pads, all moving independently and unnecessarily bulking up your shoulders and stock weld. All your gear is working as 1 unit, and doesn’t obstruct your rifle or head manipulation.

Will the AMAP3 attach as well as it does to an Agilite Plate Carrier?
While it works very well, for optimal compatibility it’s always preferable to attach your AMAP3 to an Agilite plate carrier.

Can the conversion kit stay on my gear or do I need to remove it after every use?
No, it’s very low profile and can stay on your gear permanently if you like.

Does the conversion kit require any sewing or special tools to attach it?
No, it can be attached in seconds and requires no tools at all.

Can I use the conversion kit to attach an Agilite AMAP2 or just the AMAP3?
For it to be able to used with an AMAP2 you will need 2 additional buckles that can be requested from Agilite when placing your order by emailing customercare@agilitegear.com

Does it connect to plate carriers with laser cut MOLLE instead of traditional MOLLE webbing?
Yes.

I have an Agilite plate carrier-do I need this conversion kit?
No.

Customers Return Policy - If you are not 100% satisfied with your purchase, you can return the product and get a full refund. You can return a product for up to 30 days from the date you received it. Any product you return must be in the same condition you received it in. For any further questions and for info on returns from outside the U.S please contact us at customercare@agilitegear.com

I bought this to be able to attach to my Crye JPC. Works great and functions well. Highly impressed by the quality of these products.

This pack is as awesome as the videos show.

Exactly what I needed…fit on my plate carrier perfectly 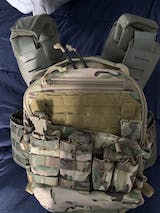 I just received the new pack. At first inspection the pack looks great, stitching strong and clean. I installed the conversion on my 5.11 plate carrier with ease and mounted the pack to the carrier. It is as advertised. Time will tell how well it holds up to range and travel abuse.

I run a AR500 Plate Carrier Currently. I ordered the AMAP III as an attachment for my plate carrier, it was a while before the conversion kit was available, but ordered it the minute it was available, I have since used the conversion kit and attached my AMAP III to my plate carrier, it was very easy to do after watching the accompanying video on its use.

Thank You Agilite for such an awesome Assault Pack and for providing a solution for non Agilite Plate Carriers making them capable of utilizing the AMAP III Assault Pack!

Sign up to get the latest on sales, new releases and more …